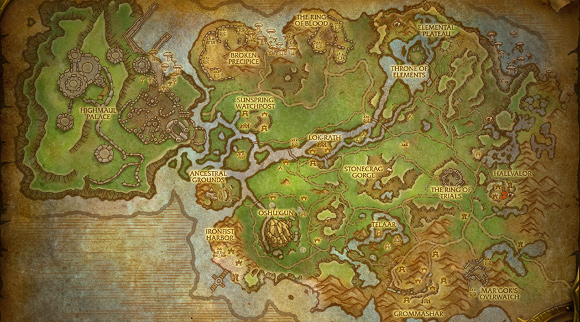 The Nagrand of Draenor is a different place with familiar landmarks, which often listed as one of people’s favorite BC zones. Just seeing the zone with harborages and familiar sights like Telaar and Oshu’gun interspersed with entirely new (to us, at least) places like Grommashar and Highmaul Palace caught my eye.

So how do we get to Nagrand, you ask? Well, Senior Game Designer Eric Maloof explains:
You’ll be led to Nagrand by a quest you’ll receive in your Garrison that involves sending new supplies to the front. The Alliance and the Horde-not working together, of course-are trying to establish a toehold in the zone in order to take on the Warsong clan. The Warsong clan has had problems with the ogres in the past, but they’re really the top power here.

The Alliance will be working alongside characters such as Vindicator Yrel and Rangari D’kaan, Thaelin, and Hansel as they progress through the storyline. The Horde will be working alongside Thrall, Durotan, Draka, and Drek’thar-even Aggra will show up and surprise Thrall.
Hopefully the process of building your outpost and fighting the Warsong clan throughout Nagrand will include a trip inside Oshu’gun, one of my favorite locations in the zone. Head over to the official preview now to take a look at what awaits you in Nagrand. Here’s a hint – the words ‘mounted’ and ‘combat’ pop up in there.